What is Paulin, Paulin Paulin®?

Paulin, Paulin, Paulin is a family business that circulates, develops and preserves the works of Pierre Paulin. It aims to offer a heightened panorama of the designer’s oeuvre to bring to light the amazing modernity of a creator who was constantly researching new concepts and ideas.

A privileged partner for events focusing on Pierre Paulin (exhibitions, publications, productions, sales), Paulin, Paulin, Paulin works to bring dynamism and coherency to the different projects initiated around the designer. Paulin, Paulin, Paulin  acts as a liaison, clarifying and accompanying the proposals and contributing valuable precision and contacts.

In order to preserve and protect the Paulin heritage, Paulin, Paulin, Paulin researches, inventories and classifies Pierre Paulin’s designs and archives, revealing the full scope of his protean and visionary oeuvre. By making the collection and the working papers available (drawings, photographs, models…), Paulin, Paulin, Paulin aids studies and discussions on the designer and launches new projects and unique partnerships with public or private institutions.

A legacy in the making:

Paulin, Paulin, Paulin produces and sells rare pieces from the work of Pierre Paulin, most of the models we present have never known commercial editions at the time of their design for technical or economic issues. The company’s vocation is to bring into existence or prolong some of Pierre Paulin’s most cherished dreams. 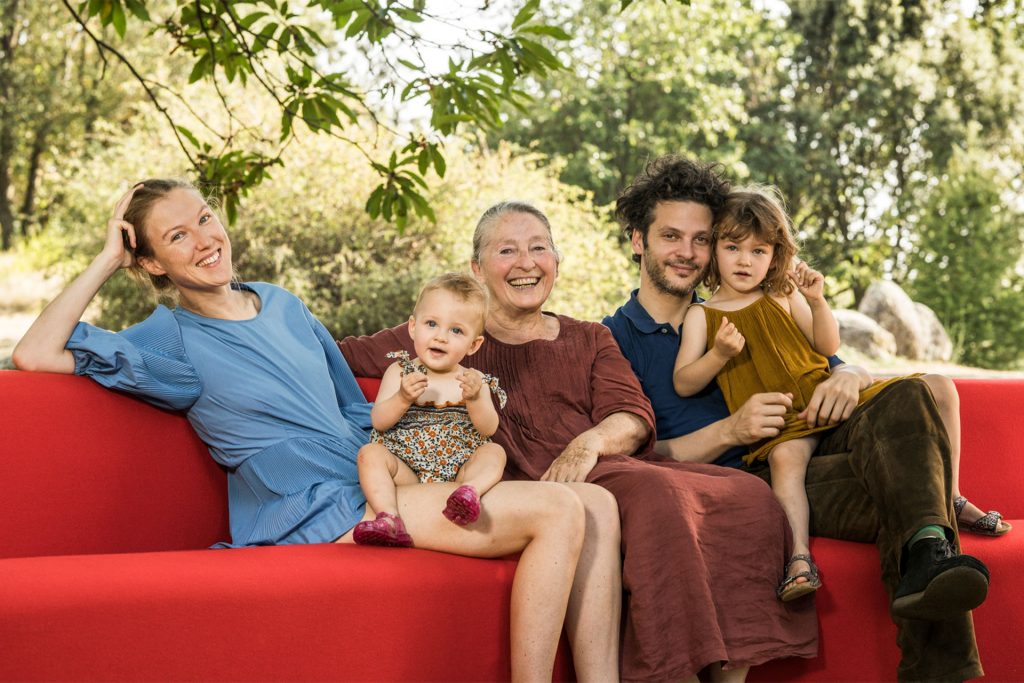 In the 1990s, the couple wanted to buy a house in the Cévennes, where they conceived a “site/oeuvre” nestled in the mountains. Their idea was to create a foundation for students and researchers and an atypical site for experiments and exhibitions. While this concept did not come about during the designer’s lifetime, today Maia Paulin works actively on this generous, openhearted and convivial project.

Benjamin Paulin is Pierre and Maia Paulin’s son. He is married to Alice Lemoine, whose mother was a colourist for Paulin and a family friend. Benjamin and Alice first met when they were children, lost touch, then met up again years later.

It is together and in a proactive way that they develop this family project, putting all their energy to make meet the generations and the worlds around the special editions they realize for the first time, thus continuing the wishes expressed by Pierre Paulin in 2008

Paulin, Paulin, Paulin can also count on the unwavering support of Pierre Paulin’s closest collaborators. Familiar with the archives, they are authority on the history of each piece, from design through to creation.

Their perfect knowledge of the Paulin style both in terms of creative processes and manufacturing techniques make them experts and valuable collaborators.

Paulin, Paulin, Paulin is surrounded by the best French craftsmen to realize the exceptional pieces designed by Pierre Paulin, scrupulously respecting their integrity and the level of requirement that the designer had set for himself. 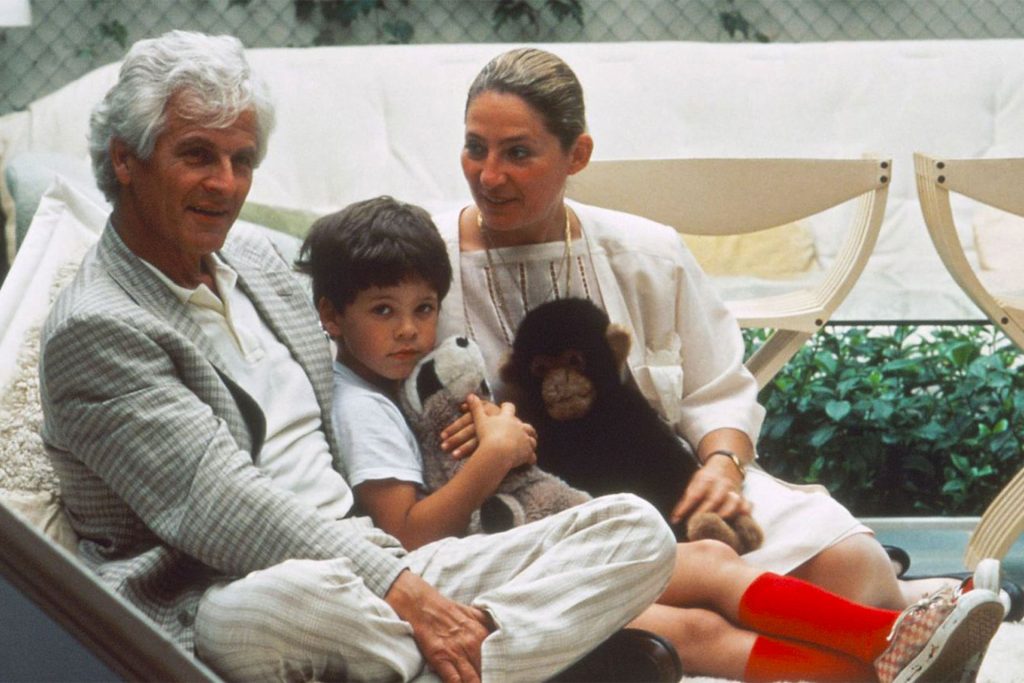 Creation as a family heritage

Born in Paris in 1927, Pierre Paulin’s father was a dentist and his mother of strict Swiss-German stock. He spent his early childhood in Laon, dreaming of a different life far away from this working-class city in Northern France, where the only future was either the military garrison or working in the railway factories.

From his early childhood, Pierre was fascinated by the personality of his uncle Georges Paulin, a passionate and whimsical dandy who gave up his career as a dental prosthetic technician to devote himself to his true passion: motorcar design. Georges Paulin invented the Eclipse folding roof system and in the 1930s worked for the greatest coachbuilders of the day, then with Peugeot, Bentley and Rolls Royce. An elegant and intelligent autodidact, he was a role model who inspired young Pierre for many years, showing his nephew the fulfilment to be gained from creation and travelling off the beaten path. Pierre’s second major influence was his great-uncle Freddy Balthazar Stoll, a sculptor and a student of Rodin whose work fired Pierre’s imagination and stimulated his sensitivity to art.

At the end of the war, Pierre Paulin went to Paris and registered at the Camondo decorative arts school. Although he rejected the classical teaching and criticised the lack of ideas among the teachers, his artistic sensitivity and dazzling ability to imagine objects in three dimensions were soon remarked by his teacher, Maxime Old, who recommended he join the workshop of Marcel Gascoin, one of the creators of the Union des Artistes Modernes (UAM). There Paulin soaked up Scandinavian aesthetics and clearly perceived the role that design could play in society. He then joined the interior decoration service of the Galeries Lafayette department store, where department director Geneviève Pons introduced him to the work of American designers in the pages of Interiors magazine, notably Eames, whose clean lines he greatly admired, as well as Bertoia, Nelson and Albini.

By 1953, Paulin wanted to design his own furniture but was unable to find a manufacturer. Thanks to financial support from his father, he produced his own furniture pieces and showed them at the Salon des Arts Ménagers. His designs attracted attention and soon he was developing desks and chairs with Thonet-France, including his very first single-shell chair.

In the late 1950s he was recruited by Kho Liang Ie, the creative director of Dutch design firm Artifort, for whom he became a privileged collaborator. There he continued his research into form and technique, tested his intuition and worked with new materials. Artifort offered him a veritable playing field in which to experiment and develop his research on the relationship between the body and furniture. This fertile collaboration continued until 1975; most of the iconic models he designed during that time have been in constant production ever since.

Meanwhile, Pierre Paulin developed work as an interior designer, an activity which gave him a broader grasp of furniture beyond the single scope of each object and allowed him to envisage a space in its sculptural dimension. He worked for Dior, the ORTF and Bertrand Faure, the car parts manufacturer.

In 1967 he met Jean Coural, the administrator of the Mobilier National, a French institution devoted to state furniture production. Coural recommended that Paulin design the furniture for the Louvre museum and introduced him to President Pompidou and his wife, who were looking to redesign their apartments at the Elysées Palace.

In 1975 Paulin founded ADSA with Maia Paulin and Marc Lebailly. A design agency and trend forecaster that advised the industry in creative direction and brand image, it also produced designs for products and public spaces that still stand as icons today. Created in the mid-1980s, the Calor Jet Line 30 iron revolutionised the aesthetics of domestic appliances, in its colour and conception alike, and broke with the codes of its day. ADSA was the leader in its field for 15 years, designing, among others, a new outfitting of Versailles Rive-Gauche train station; the Hall Méditerannée at the Gare de Lyon; garden furniture for Alibert and Stamp; the colours and graphic design for the signage at Paris-Nord exhibition park; and the Trocadéro range for Jacob Delafon bathroom appliances.

In the early 1980s, Paulin took everyone by surprise by creating a new limited edition furniture collection that revived notions of classicism and savoir-faire, in materials and design alike. Intuitive and avant-garde, Paulin foresaw the emergence of a collector’s market for design.

From the 1990s, Pierre and Maia chose the Cévennes region as the site for Paulin’s creativity. He approached this mineral setting as an architect, designer and landscape-designer in one. He started by designing and organising the garden, treating it like an interior. Every rock and tree had its place, just like pieces of furniture. He then turned to the house, which strikes up a dialogue between modernity and Cévennes traditions, art, nature and handiwork. This “natural retreat” gave Pierre Paulin a space from which to observe the world from a distance in full serenity. From the late 1990s he took part in conferences, became involved in a number of projects to produce re-editions of his pieces and designed new commissions for the Mobilier National.

After numerous exhibitions and publications, in 2008 Pierre Paulin expressed his desire to self-produce works that had never been manufactured before. Paulin, Paulin, Paulin has established in this dynamic. When he passed away on June 13, 2009, he was fulfilled and at peace: his œuvre had at last gained due recognition in France and his designs would live beyond him. A true artistic and public acknowledgement for a man who never sought exposure or attention.